Can I just say, Vermont fall foliage in peak is like WOW. Honestly everywhere we looked it was like looking into a dream.  It doesn’t happen often, but I felt like there were too many good spots to shoot that I just didn’t have enough clothes.  And let me tell you, I usually try to pack enough for 2 outfit changes a day haha! This little red sweater is soft and has a little pearl keyhole closure in the back which we forgot to shoot. I feel like it is cropped but I just tucked it into my pants anyways. I paired it with one of my favorite pairs of denim and booties. I needed a prop so I just held my friend Caitlin’s hat lol. I feel like these photos make me look like I’m in the Truman show!! Does anyone else get that vibe?

I want to give you guys a good recap of our recent trip so I’ve decided to split it up into two posts! Our visit to New England started with my sister and I flying into New Hampshire around midnight, (specifically the Boston Manchester airport) and then we staying at a Country Inn nearby. It was the first time Rosie (my yorkie who just turned one!) was on a plane for more than an hour, and also she hadn’t been on a plane since May. She was shaking like crazy and panting but otherwise fine. The flight attendants commented on how well behaved our dogs were which was nice 🙂 We rented a car and started the drive to Vermont a little late the next day. We ate breakfast (at a place I would not recommend unfortunately) and picked up groceries at Whole Foods since we were heading to a cabin in the middle of nowhere. I AM SOOOOO GLAD we picked up groceries because that was our only opportunity to shop at a normal grocery store with organic options for the rest of the trip!!! Also that was the nicest Whole Foods I have ever seen too and it was seriously amazing haha. 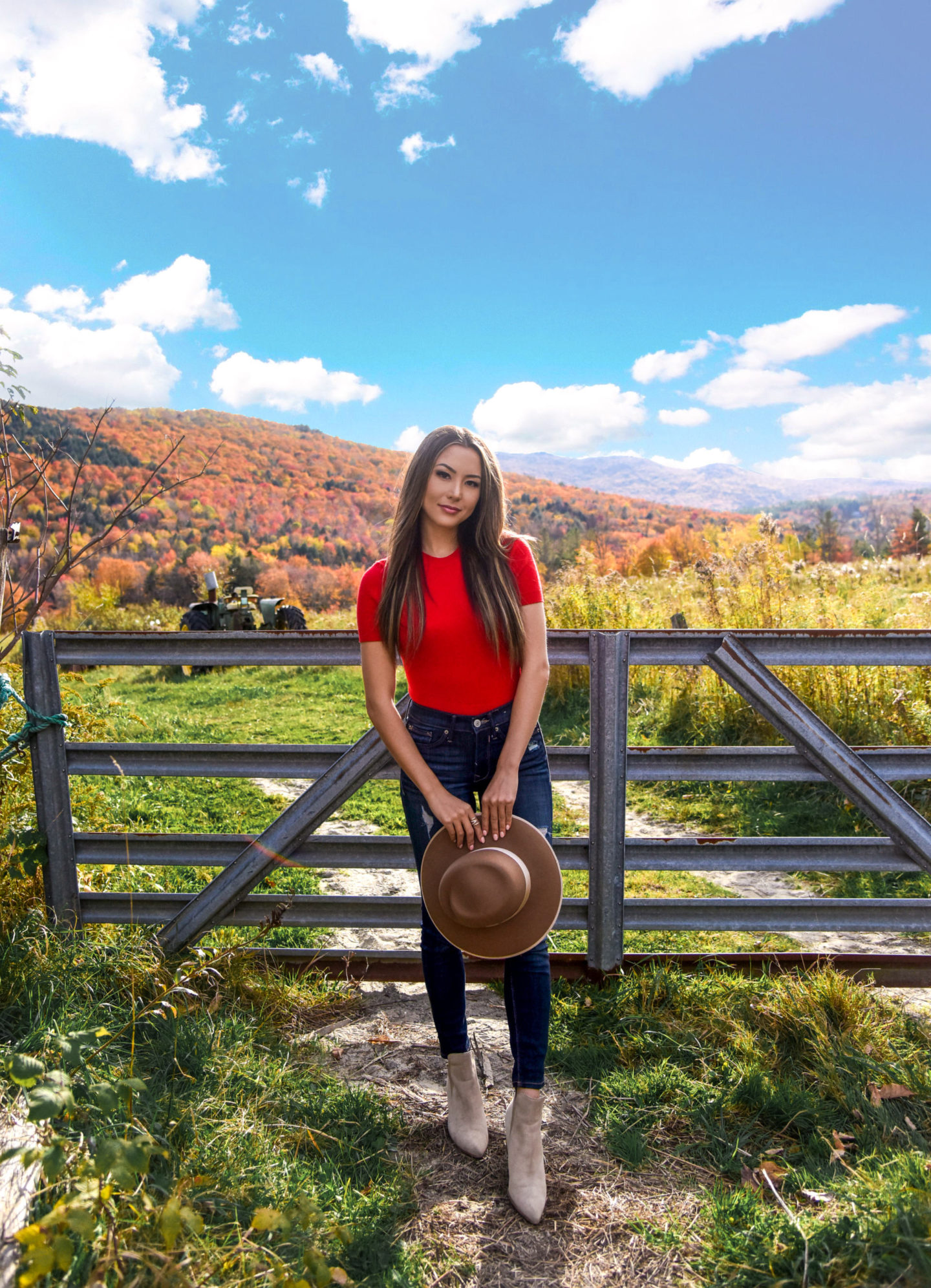 The drive to our cabin in Vermont took about three hours and the service was pretty spotty. That is something I do not understand about living in non urban areas, how do people survive without service? I mean granted some of them might have WiFi but what if your car breaks down and you don’t have service? Everyday in Wardsboro I went about six hours without service since that’s how long we were usually away from the cabin. Out of Caitlin, Jasmine and Caitlin’s brother Chris, my phone was the only one that was not able to pick up google maps without service but somehow all of theirs could. So that was scary!

The cabin Caitlin found was so great. We had four bedrooms, a fireplace, a full kitchen and a hot tub outside. I am not really a bug person and there were quite a lot of bugs out there so keep that in mind if you plan to get a cabin in the woods too lol… The weather was pretty dang perfect even though it was forecast for rain the whole time, it barely sprinkled only one evening! 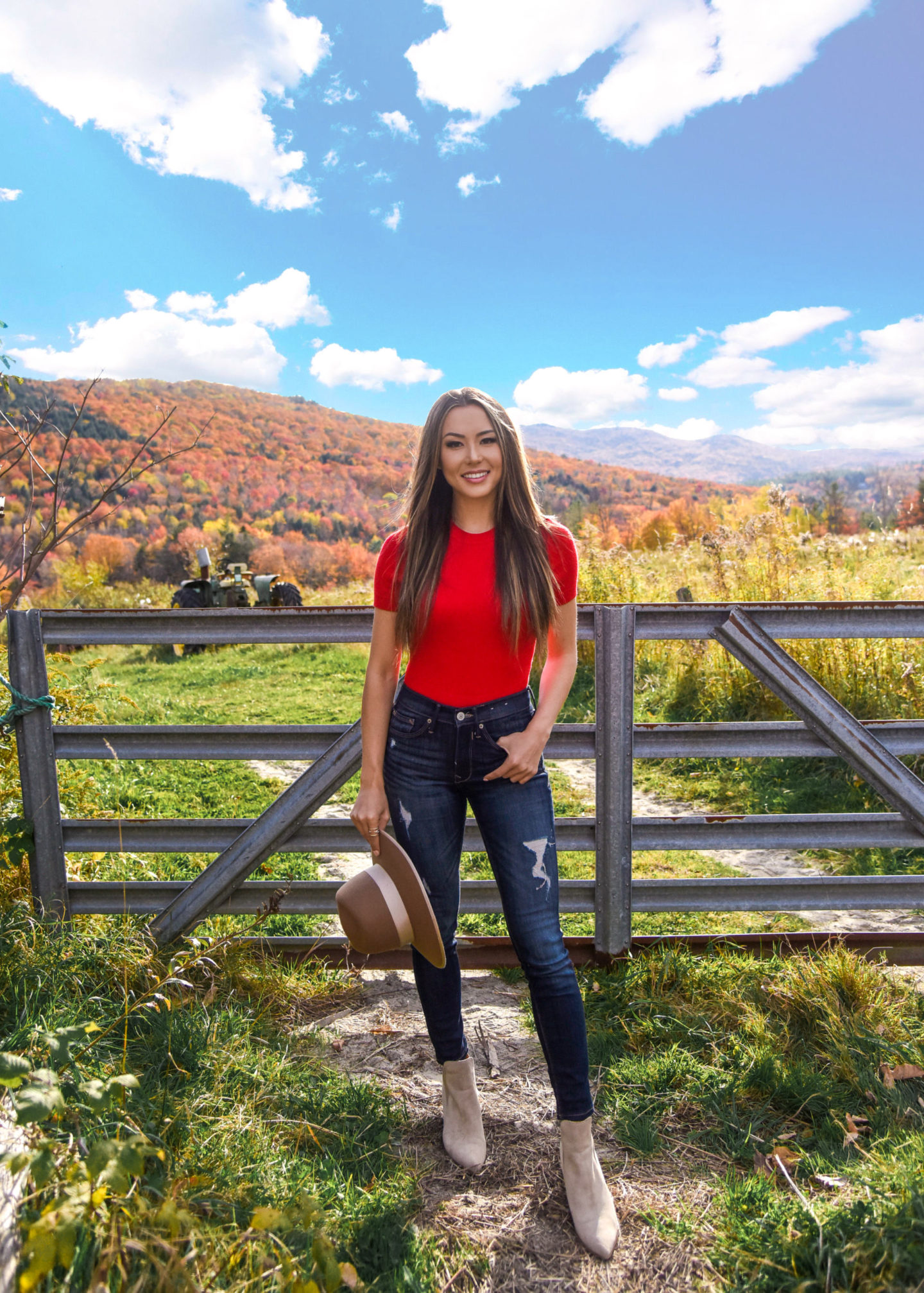 It was such a nice moment reuniting with Caitlin and Chris. We just see each other once or twice a year since we live across the country and being able to do these trips together is the best. Since we arrived late on the first day we just had time to hang out, unpack and eat dinner. We went to the Dover Forge Restaurant. It was pretty good, I think Jasmine and I split the spinach salad with chicken. Chris got baby back ribs and Caitlin got the spinach salad with salmon.

The second day we visited the Vermont Country Store on Rockingham Road which was about an hour away. That was pretty fun and that store had so many fun goodies. We were pretty disappointed they did not have their famous mum filled truck outside since we all thought that would make such a cute pic. (Turns out we should have gone to the Weston one) The side of the store that doesn’t sell food is completely dog friendly so we brought both Sophie (Jasmine’s dog) and Rosie inside. I got Rosie a cute pumpkin sweater from Petco and a matching bow for her hair which everyone loved! We decided to eat there and Jasmine and I shared a garden burger with sweet potato fries. It was pretty good. They had so many yummy desserts like apple cider donuts and maple leaf ice cream too.

The drive back was sooooo beautiful but  it had gotten pretty late since we spent so long at the store. We stopped at the local Wardsboro Grocery Store for some ingredients for dinner since we decided to do a taco night at the cabin. They had everything we needed except for organic of course. Taco night was a success and we ended up doing it almost every other night!! 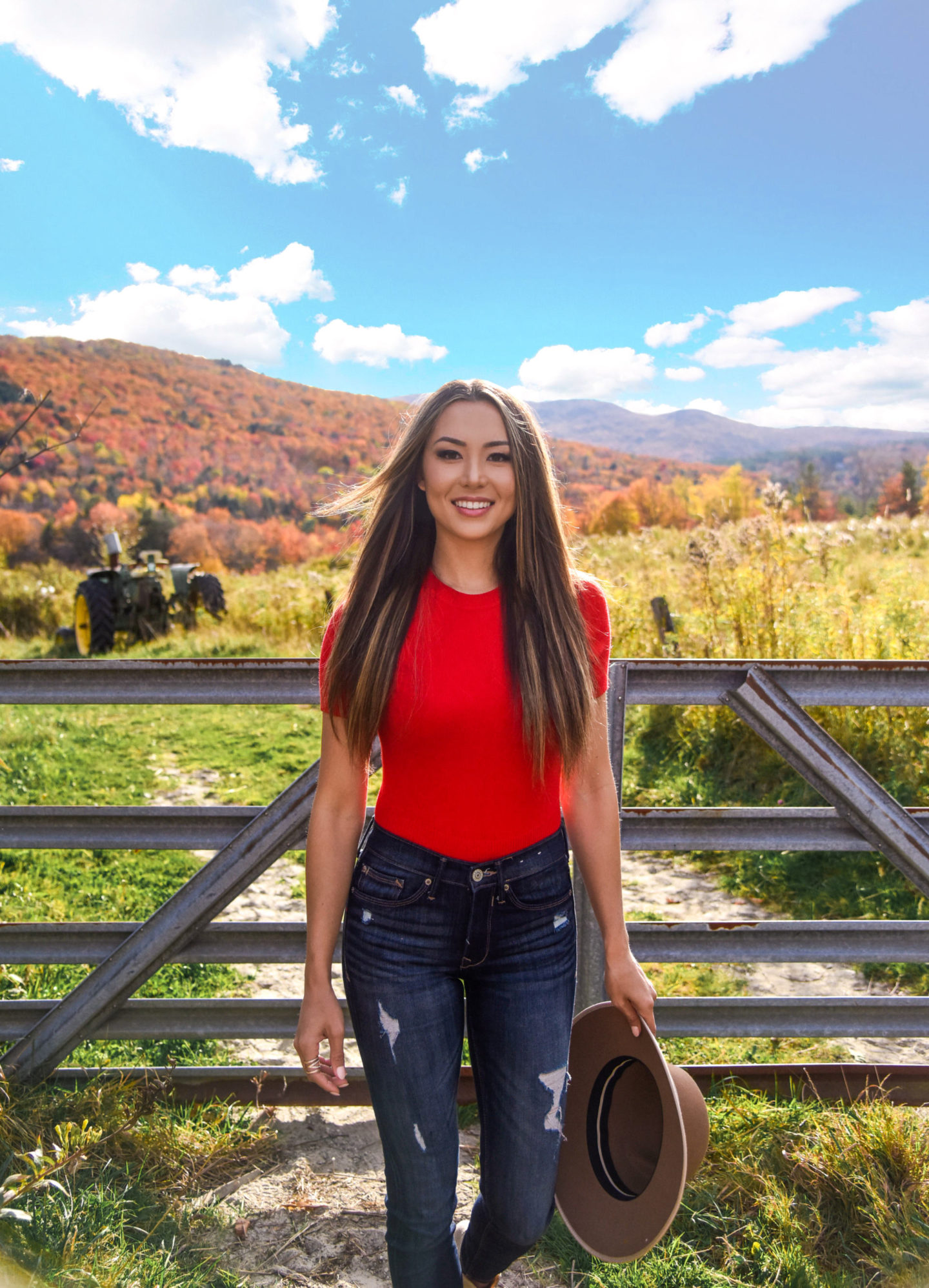