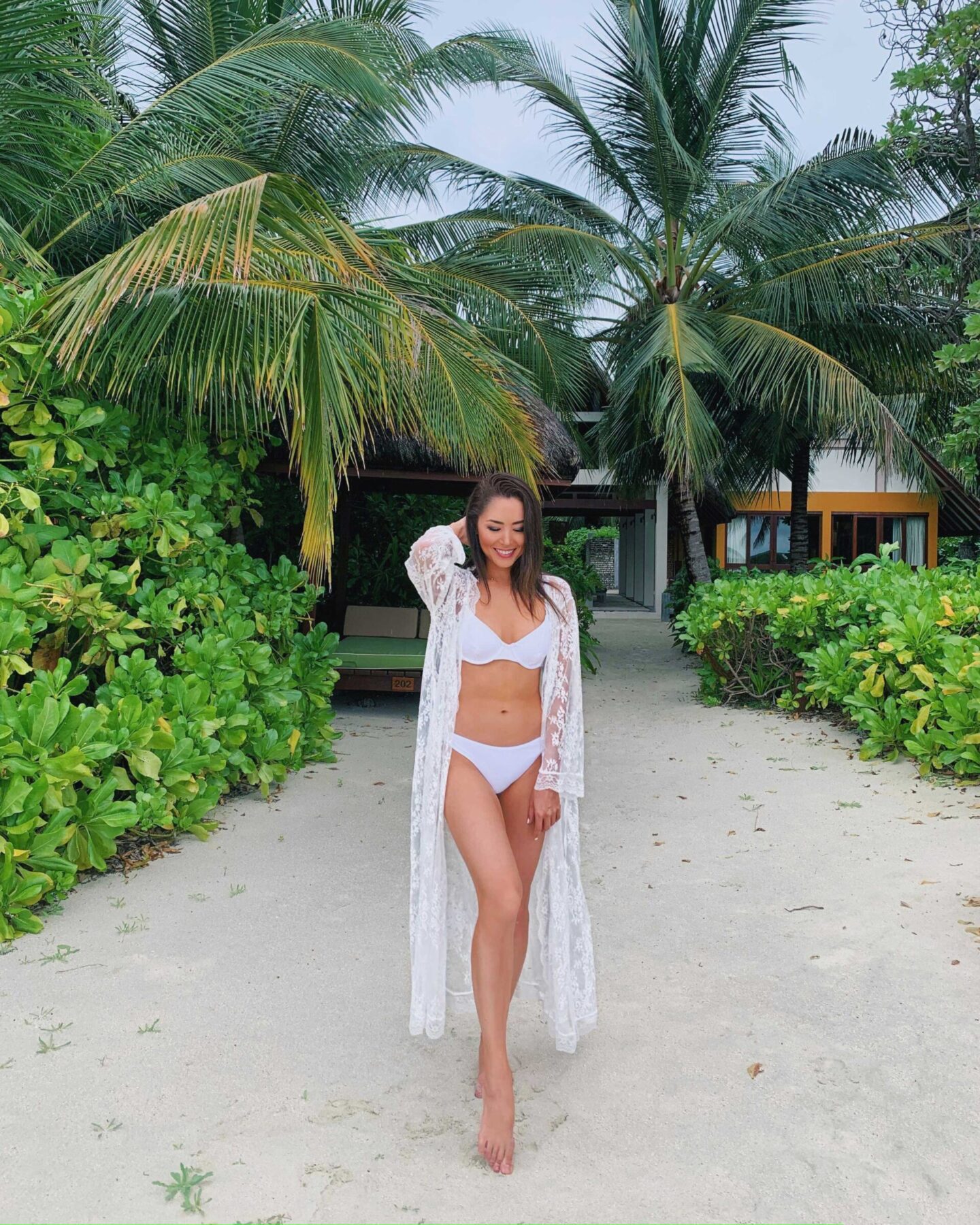 Now on to part three of my Maldives recap… beginning with our first breakfast at Four Seasons Landaa Giraavaru! This morning we were able to choose between Cafe Landaa and Blu and we chose Blu. I tried the Spanish omelette which was pretty good, but definitely needed some spice! I love their complimentary croissant basket. I also ordered some fresh fruit. 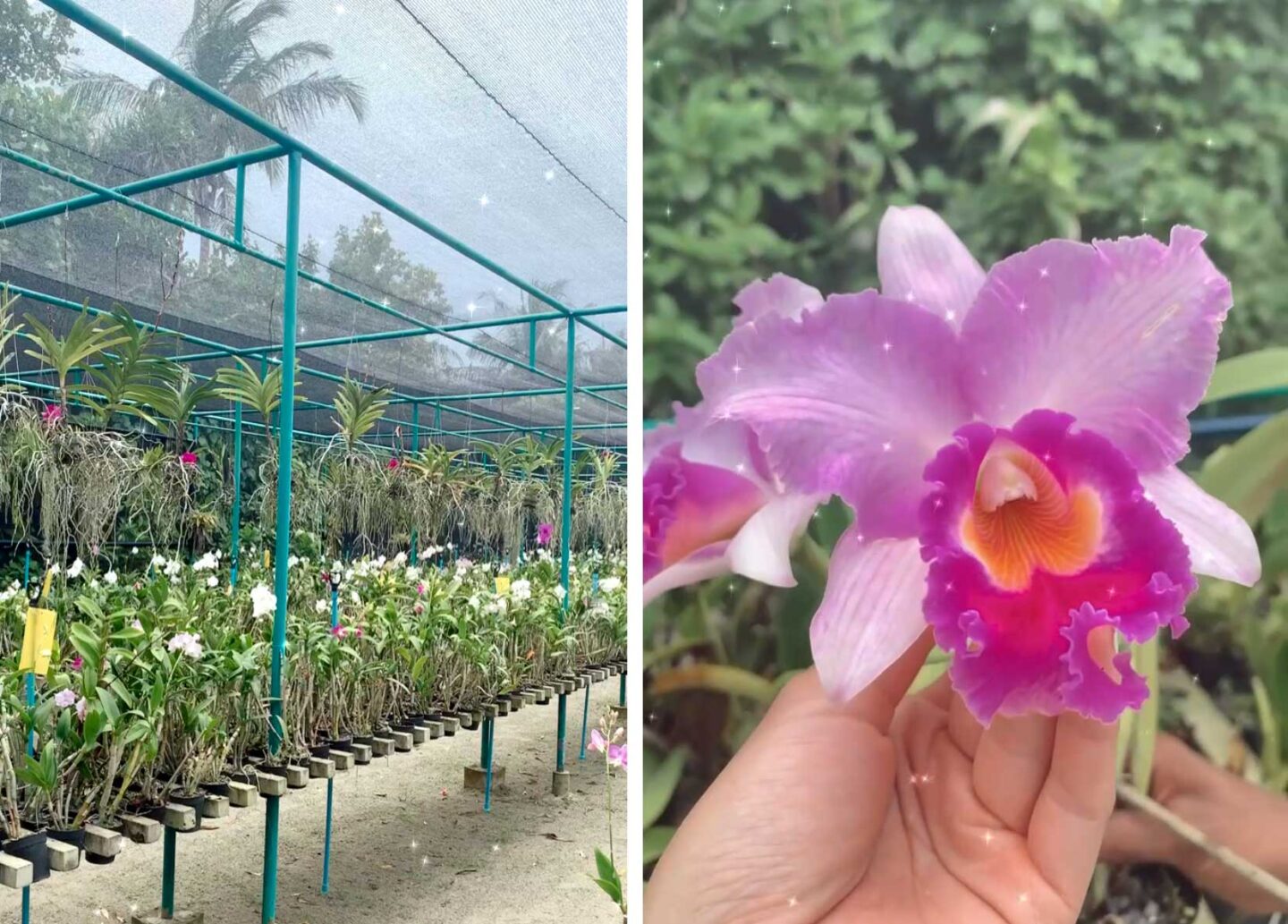 Today we were supposed to do their “Aqua Float” activity after breakfast, but it was raining pretty hard again. We decided to just hang out in our room and get some work done before Irene went for a massage and I checked out the resort’s orchid nursery. They have over 12,000 orchids growing and I love how unique each one is. I have an orchid at home but the flowers fell off and it has now been a year with no new flowers 🙁 I know it’s alive though because it keeps growing gorgeous new leaves.

It continued raining throughout the day so we we basically stayed in the whole day. Irene, Haley, Haley’s dad Steve and I actually grabbed lunch today at Cafe Landaa and we decided to try their pho! It was literally amazing and I am still craving it to this day! Highly, highly recommend trying it if you have a chance to visit! 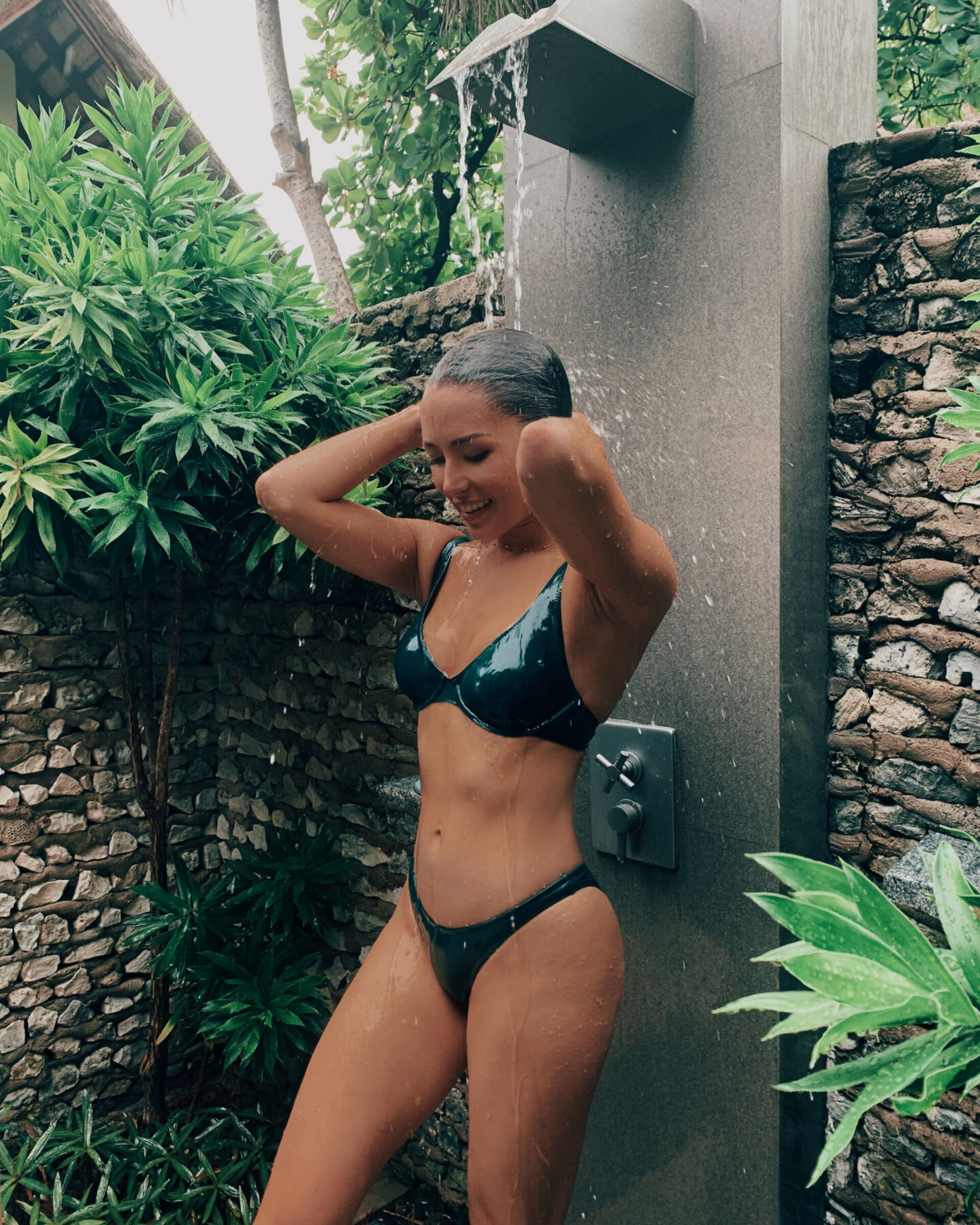 We had snorkeling for the whole group scheduled, but due to the weather (it was also windy), it was canceled. We were getting so antsy being inside at such a beautiful location, so despite the elements, Haley, Irene and I snorkeled a bit around the resort and took photos, which was fun 🙂

Unfortunately, the cancelation of plans continued. Dinner, which was supposed to be at Fuego Grill (I think this restaurant is out over the water –  and I imagine it’s very lovely when the weather is better) was moved to dinner at Cafe Landaa. 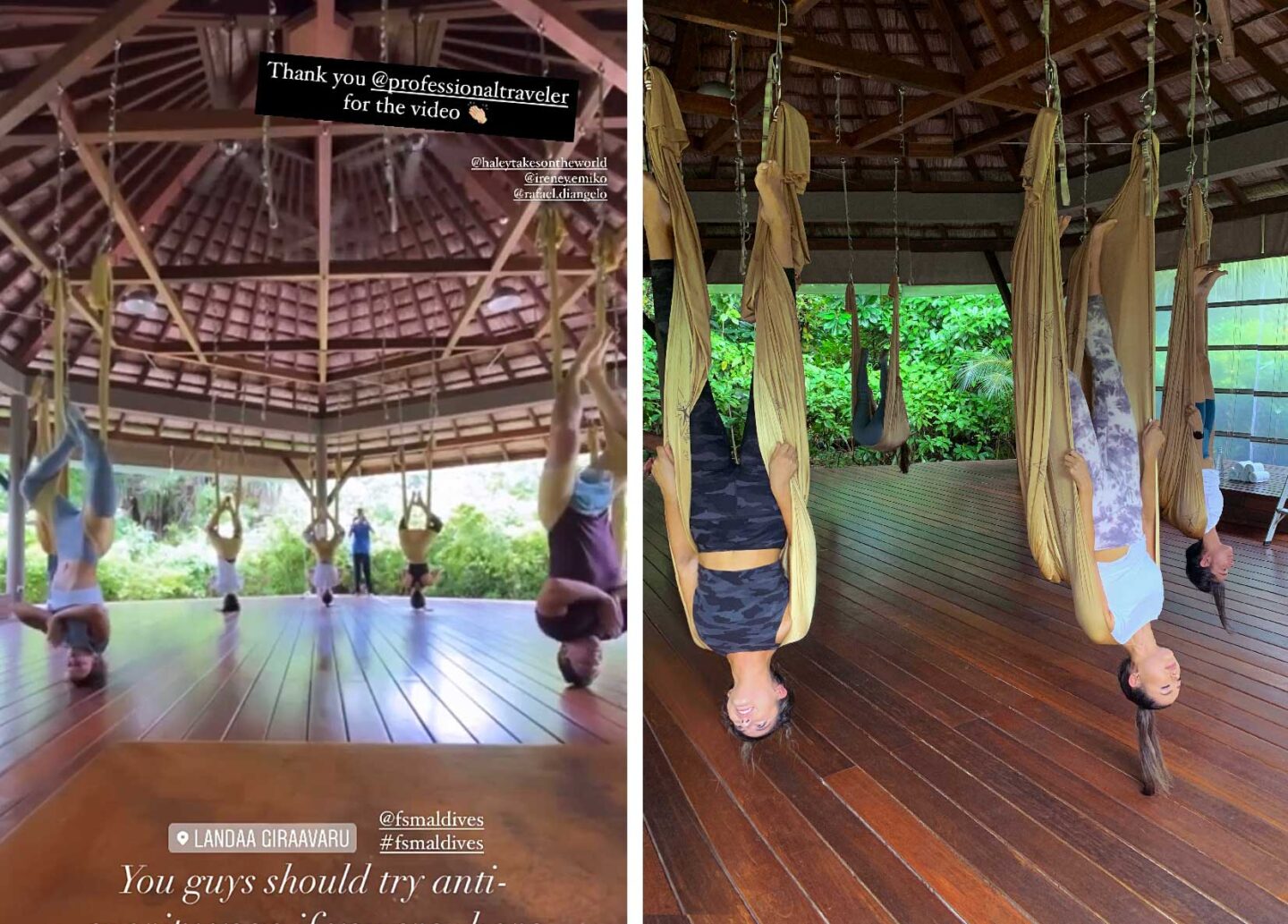 The next day, we rose to MORE RAIN. 🙁 Luckily on this day, it seemed a little more off and on, and soon enough we were on to our activity of the day: Antigravity Yoga. This was by far one of the coolest activities we had the opportunity to do!! I love that it is an activity anyone can do as well. Antigravity actually allows one to relieve stress in the body due to the inverted postures, and it was quite fun as well.

Afterward, Irene and I went around the island for some last minute shooting even though it continued raining off and on, we just dealt with it!!

This evening was the special Holi Moli celebration, due to it being festive season in the Maldives. I guess Holi Moli is that colored powder festival I have seen all over social media every year, but there was no colored powder here! It was kind of hilarious because Irene and I showed up early, and I noticed the dinner was much more extravagant than I had been expecting. I felt underdressed and told Irene I was going back to the bungalow to change. 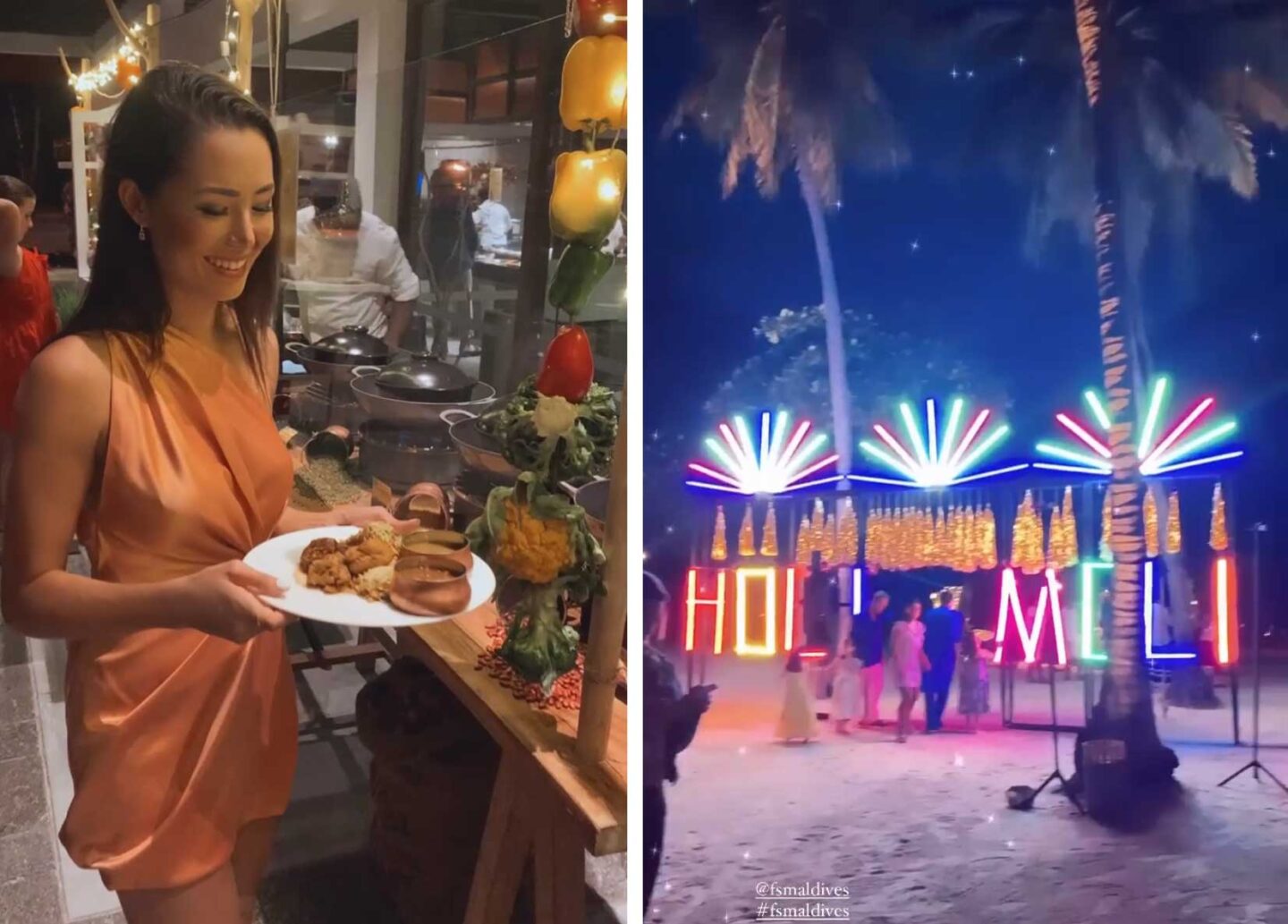 I went back and changed as fast as I could! Just before I was ready to go back out, I heard the loudest downpour yet. I determinedly grabbed an umbrella and started the long trek back to the restaurant (made longer of course by the dreadful weather), slowly slopping through deep sandy/muddy puddles as the rain fell in sheets around me. I was wearing flip flops and my dress was short so I got soaked to my knees but it didn’t matter too much I guess. I was pretty miserable though I just felt I didn’t have a choice…I wanted dinner! Irene was texting me, like, “are you alive??” because she thought I had been halfway back when it started raining. I guess I was lucky then because that wasn’t the case, but I didn’t feel too lucky.

Dinner was amazing though as they had a huge Covid-safe buffet set up with all types of delicious Indian curries, meats and desserts. They even had a mini dance performance by their own resort workers and I must say the energy was spectacular! By the end of dinner the rain had stopped and I felt much better about the evening 🙂 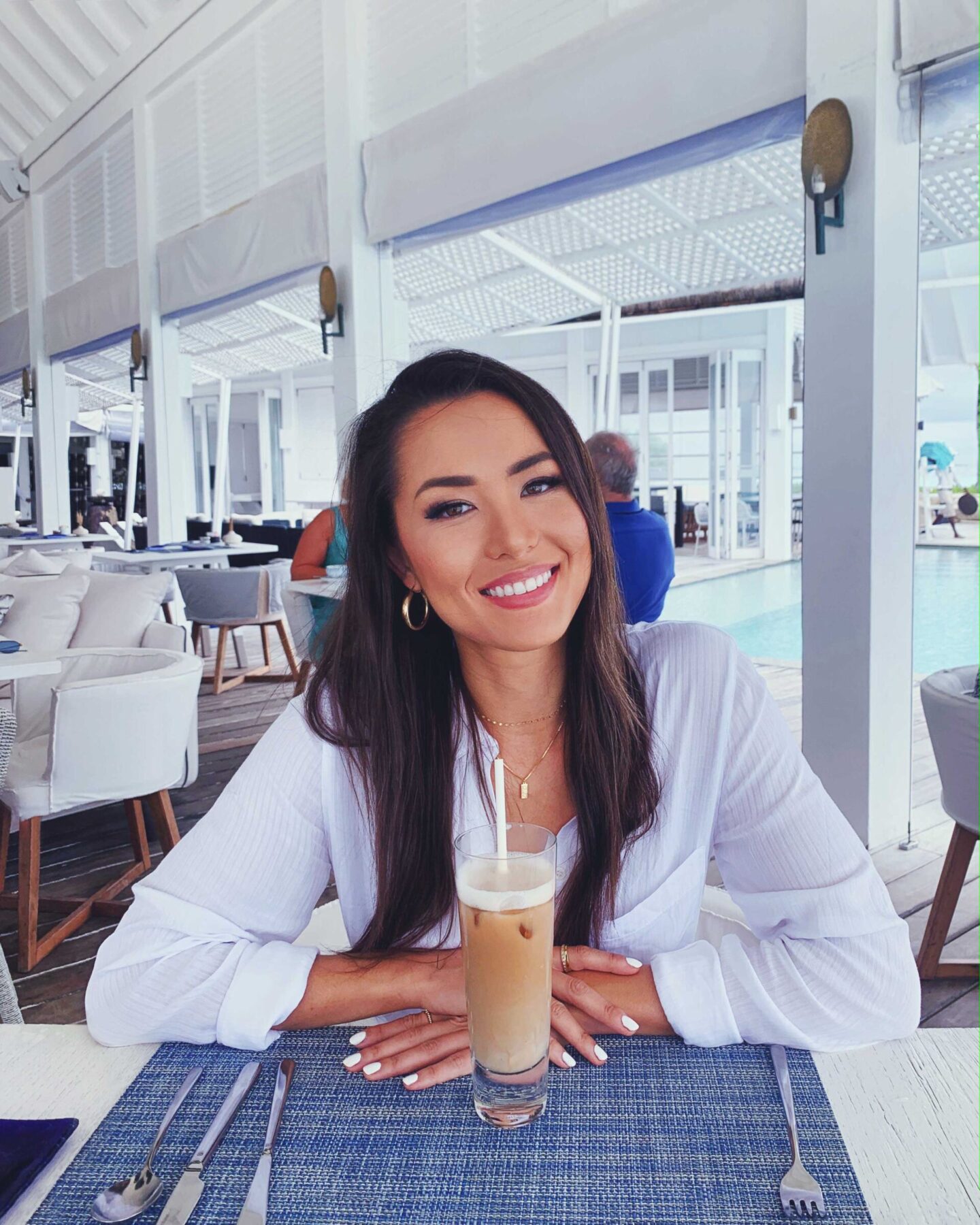 Our last breakfast at Blu, a restaurant at Four Seasons Landaa Giraavaru.

Of course, on the very last day, the weather began to look more promising. We were all texting each other at 6 am like “Hi sun,” “Omg so excited,” “Ahh.” Irene, Haley and I met up for breakfast at Blu and you guys can bet we went all out. We ordered ferrero rocher waffles, sourdough toast with poached eggs and bacon, croissants, green juice, soy latte and another Spanish omelette.

With breakfast over, we did a little last minute shooting before they picked up our bags, we said goodbye to the hotel staff and we were officially off! First we took a speedboat to our seaplane. Once on the seaplane, they gave us earplugs and hand wipes. I am used to wearing ear plugs at home when I sleep since I have been scarred from living next to a busy street, and so when they gave me ear plugs, I twisted it (like I am used to) and was about to put it in my ear before I noticed it tore a little. I thought nothing of it, and so I put it in my ear anyways. I guess the ones I usually use are thicker or tougher material… because I swear I didn’t tear it hard, it was just really soft. The Four Seasons rep said they were really high quality ear plugs. 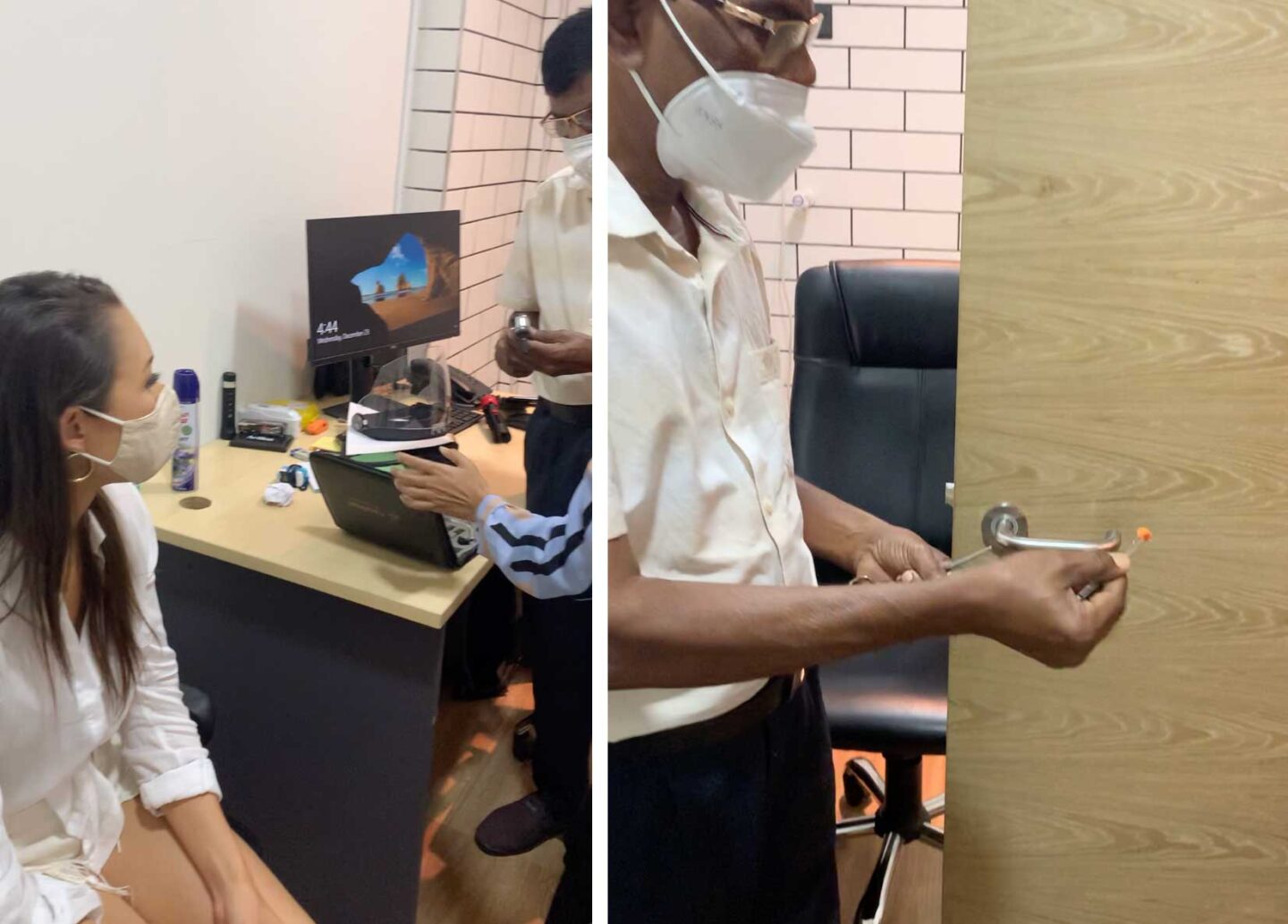 Tearing it and then putting it in my ear was a huge mistake 🙁 The ear plug broke and part of it got stuck in my ear! Fortunately we had some time before the flight still. I googled what could happen if you “lose” something in your ear, and the results came up with hearing loss, infection, etc. When we arrived at the airport I informed the Four Seasons Guest Experience Manager (Mohamed Nadheem) as I tried hard not to panic, and they were able to take me to the airport doctor right away. The crazy moment was when doctor didn’t quite understand my explanation about the ear plug and he was about to stick an otoscope in my ear to look… which you can imagine only would have pushed it in deeper! Nadheem was actually accompanying Irene and I at the doctor’s office and he stepped in and pretty much saved my poor ear haha!

He re-explained what happened and finally the doctor got some special tweezers and pulled it out. My ear felt funny and to be honest, even a couple weeks after we got back, my ear would get weird buzzing/humming noises in it, so I feel that the ear plug must have done something. Luckily everything is back to normal now!!

We grabbed some snacks in the Qatar lounge in Male before getting on our next 5 hour flight back to Doha. This flight passed super quickly. We arrived around midnight and even though we were incredibly tired, Qatar Airways actually created this huge Christmas themed feast for us and we were so excited! We immediately dropped off our belongings at the Oryx Airport Hotel before heading to the Qatar Lounge for a late dinner. 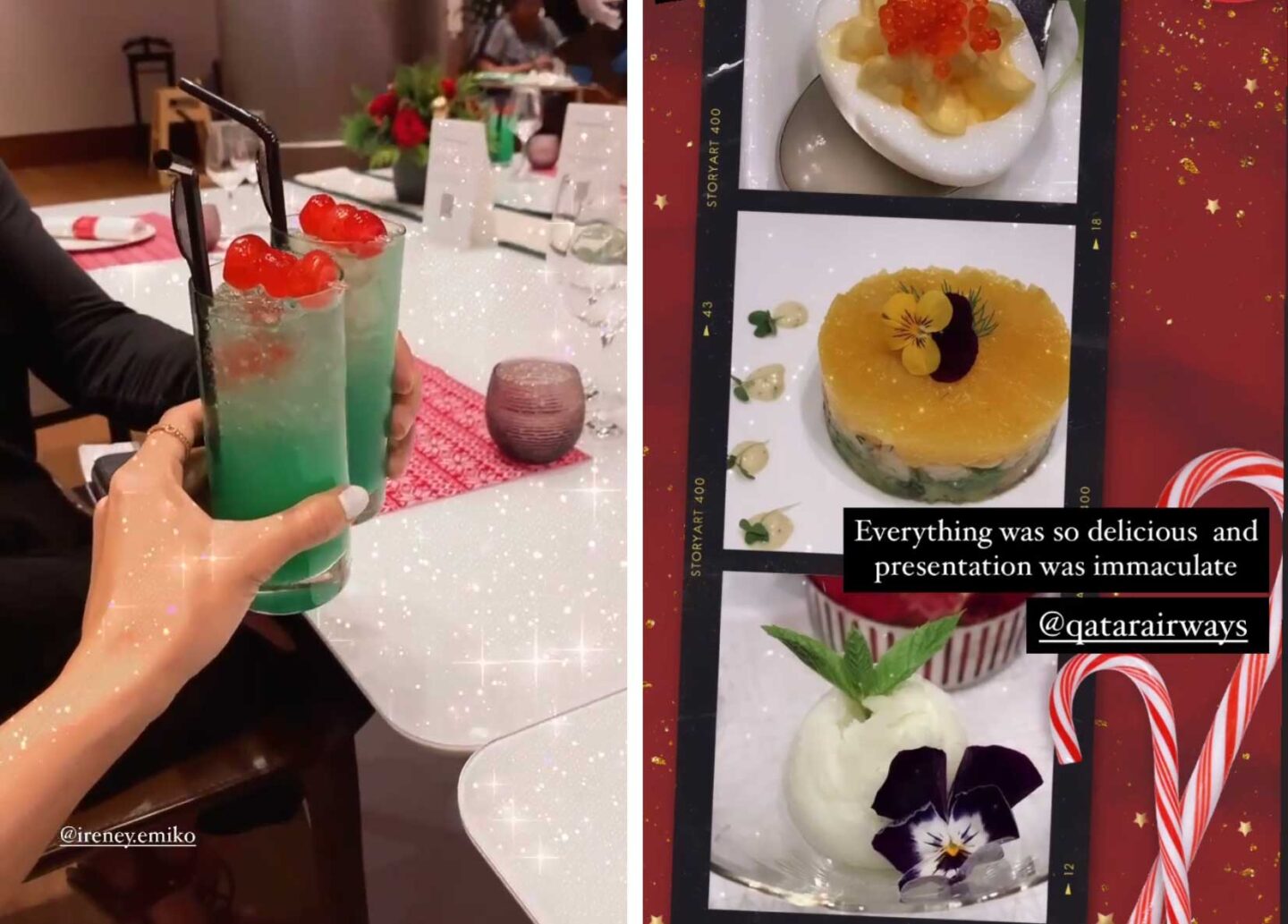 Dinner was delectable. They served us a very special 5 course meal and each part was perfect. My favorite parts were the drink, lobster tartare and the ice cream palate cleanser. I wish I could thank the Qatar staff again for the most superb service!! 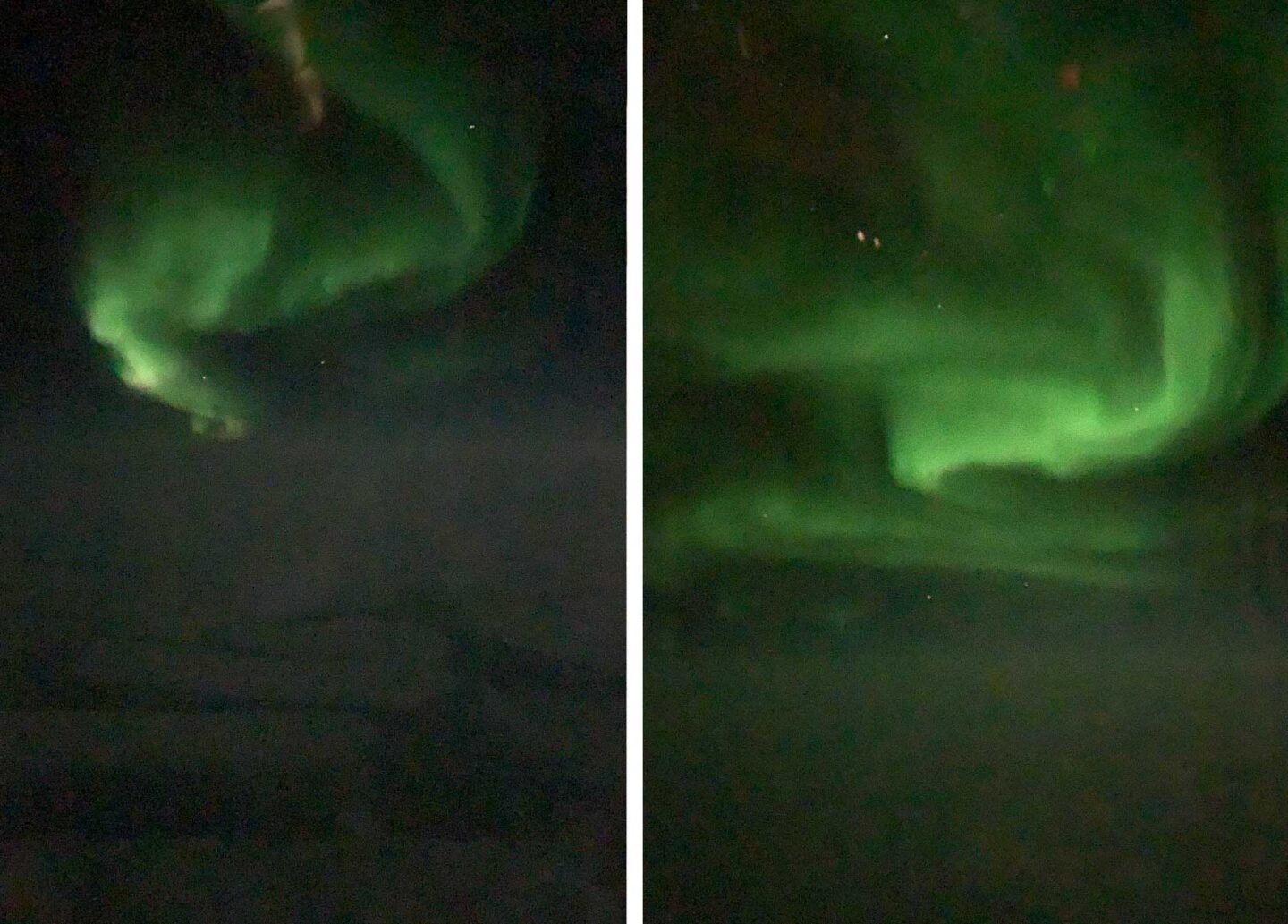 Haley’s dad woke me up for this, and I have to say, it was worth it! I’ve been wanting to see the Northern lights for years!! When I was in Alaska a few years ago I had hoped to see them then, but this was even better because we could see them from the comfort of our warm seats!

We had around 5 hours to rest before our next flight to SFO, so we said our goodbyes to Cassie, Catarina and Rafael who had different final destinations from me, Irene, Haley and Steve. Those 5 hours actually passed really fast and I probably could have slept for 20 hours. Luckily we were on our flight to SFO in no time! The food, movie options and service were again absolutely wonderful but the most noteworthy part was when Steve woke me up to check out the Northern Lights!!! I normally don’t like to be woken up by anyone for anything (lol) but this was of course sooo worth it! I actually got dizzy staring at them so long, and something I noticed while staring at them is that the green sort of dissipates and they start to look like clouds. So weird.

Anyways, that sums up our trip and I am sooo happy to be home and back in a routine!! I hope I answered everyone’s questions and that recapping my trip in some way helps someone else traveling via Qatar Airways, or to Doha, Male or even to the Four Seasons Maldives!